Every year, firefighters across the country bravely put their lives on the line battling wildland fires. They need and deserve the best possible medical support in case of trouble and Fireline Medics provides that support.

During the hectic fire season, Braden Harris, Operations Manager, coordinates the medical crews from wherever they are located, connecting them with vehicles and equipment, and deploying them to various wildland fire incident command posts (ICPs) around the country. It’s an intense job, but he credits Troy and Kelly for creating an employee-oriented atmosphere that makes it so rewarding.

“I love the chaos, I do,” Braden says. “But I love working for Troy and Kelly because you always have that sense of being taken care of.”

Troy is a Critical Care Paramedic and his wife, Kelly is an Emergency Medical Technician (EMT). They took a chance moving from Minnesota to Moscow with their growing family in 2011. They founded a successful ambulance company called Palouse Area Care and Transport (PACT EMS), that provides inter-facility, long-distance medical transport.

In 2016, Troy and Kelly were contacted by the owner of a wildland fire EMS ambulance service in Boise who wanted to sell his company, including its ambulance fleet and medical equipment assets.

“There was no way we were going to be able to buy it,” Troy says. “Number one, we had just bought PACT EMS, so we were cash poor. Number two, we weren’t interested in moving to Boise.” But on the way to Las Vegas for some administrative training, Troy and Kelly decided to pay them a visit as they passed through Boise. They immediately hit it off with the owner, who offered to finance the sale. There was no stipulation on the company remaining in Boise, so the two parties struck a deal. “We just said, ‘you know what, let’s go for it.” Troy says.

They rebranded to Fireline Medics and essentially started the company anew. It was an opportunity to marry Troy’s medical background and love of outdoors with a lifelong fascination of wildland fires.

While the company had previously focused on fires in Idaho, Fireline Medics deploys personnel anywhere in the United States. Next year, they plan to add a base in New Mexico to cover fires more easily in the southwestern U.S.

What started as a small, 2-person operation has now grown to employ 8 full-time staff members. Recently, Fireline Medics moved into larger headquarters they call the “Lodge,” on the outskirts of town with room for their fleet of 20 ambulances, 6 Utility Terrain Vehicles (UTVs), 4 single resource vehicles, a mechanical shop, and a private residence with office space.

Braden works on hiring, vetting, and training. Once a person is hired, he/she is rostered to be on-call. The company currently rosters around 80 seasonal, licensed EMTs and paramedics who are not only skilled in the medical field, but also trained in firefighting procedures. Braden, who is an EMT and firefighter himself, notes that all employees are required to be trained in firefighting before they are allowed to deploy.

“We know EMS, we know it well, and we know how to do our job,” he says. “But it’s understanding the way fire is, how it burns, being able to read weather, to read smoke - that’s what’s going to save lives.”

“We know of about 20 firefighters who have gone home because of our crews,” Troy adds.

When a call comes in from a dispatch center requesting help, Braden springs into action to mobilize resources. He maps the fires and personnel schedules on a traditional white board, which serves as a visual control center and is more efficient than a computer program.

Because Fireline Medics grew so rapidly, Troy and Kelly sold PACT EMS last year because they felt they didn’t have the time for both businesses and wanted to continue to maintain a high level of care for their Fireline staff.

“We know that they’re leaving their loved ones to go out on fires for 3 or 4 months,” Troy says. “It’s a tough decision to make, and we want them to know they’re supported.” 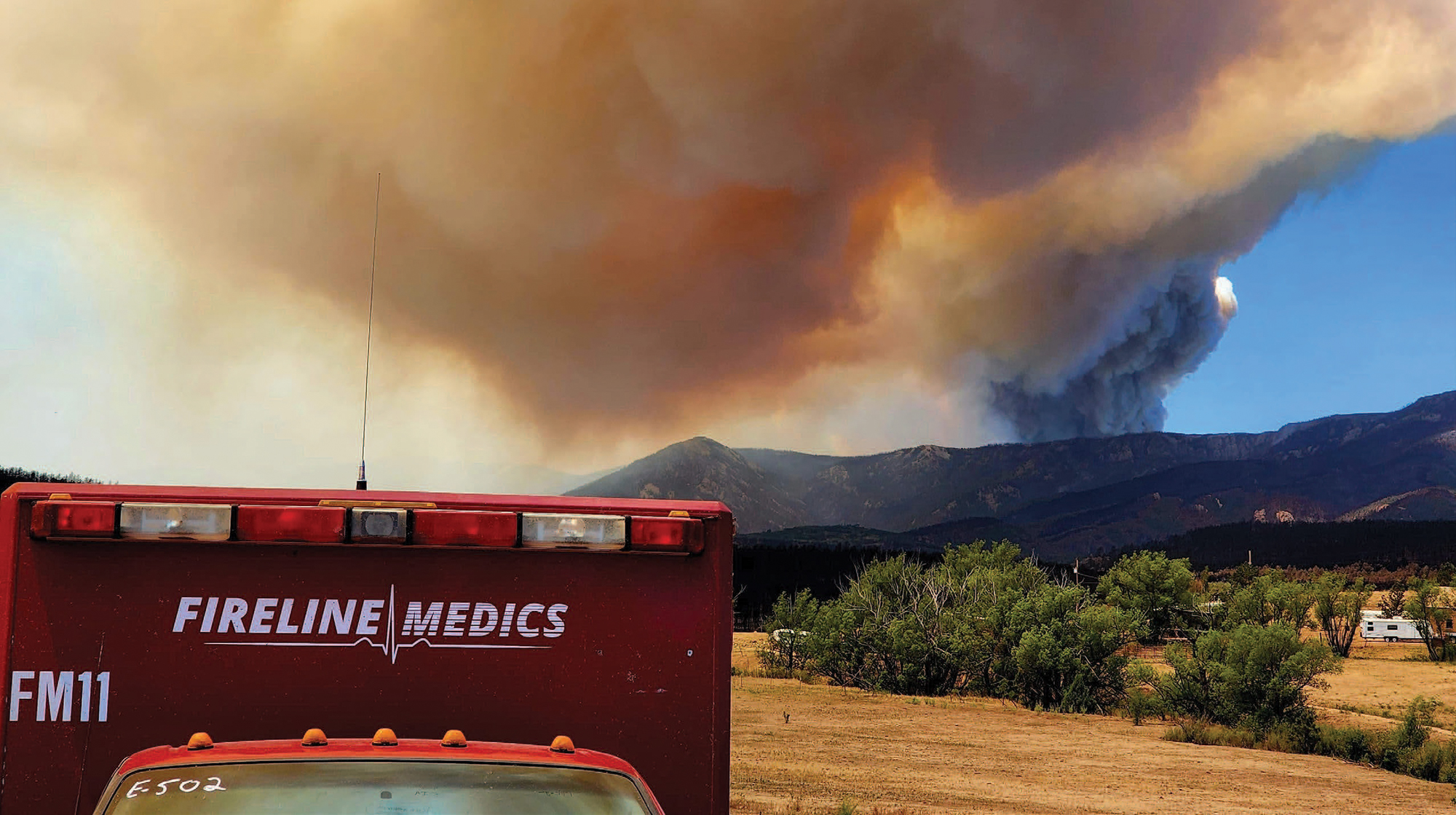 “Our big focus is supporting and investing in our employees,” Kelly adds. “The people who get into this kind of work genuinely care for people, and so when you show them that you care for them, it’s like caring for the caregiver. Because if people are happy in their jobs, and they feel heard and valued, then they will stay. And we’ve had
phenomenal people working for us. Some of our veterans from the very first year are still with us, and we’re really humbled by that.”

Troy says that Fireline Medics would like to hire more EMTs and paramedics from the northwest to fill a shortage from this region.

“There’s times when fires blow up, and they’re asking for people, and it takes us time to fly them in from Florida or Pennsylvania,” he says. So, if we can get more staff from around here, it would definitely be helpful.”

To better facilitate recruitment efforts, Fireline Medics recently launched a new website called www.teamfireline.com that encompasses all aspects of the company and encourages people who may be interested in either the fire line or the rescue teams to see what their employee-first company is all about.

Employees like Braden thrive in the fun, caring family atmosphere of Fireline Medics.

“The people we have right now, literally there is no limit to what we can do,” he says. “And it’s all because of the employees we have. So, me, I’m a mere portion of what is the greatness and the camaraderie of Fireline. I just kind of gather the people, and they make this company what it is. I just get to manage the chaos of it.”

According to the National Interagency Fire Center in Boise, more than 118,000 fires raged over approximately 17 million acres of land in the U.S. in 2020 and 2021. Learn more at: www.teamfireline.com, Facebook or Instagram