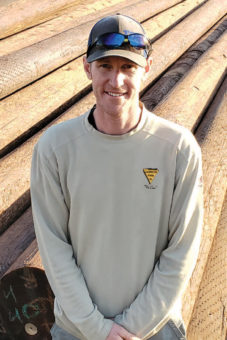 We can never predict the impact we’re about to make on the lives of others. In 2007, Tyler Forsmann attended the job fair at Prairie High School where he was introduced to the field of electric line work. He didn’t know anything about the industry but he was fascinated. Having grown up on a farm, Tyler always knew he wanted a career where he could be outdoors, so he made arrangements for a job shadow and a few years later, that chance encounter had become his career.

As with most lineman careers, there is a lot of travel, especially during the apprenticeship. Tyler says, “They’d call and say we need an apprentice, and we need them by Monday. And you’d go.” He worked in Colorado, Wyoming, Idaho, Montana, Washington, & California. He adds, “There have been so many cool places that I would never have seen.”

Eventually, he and his wife were ready to build a family and he was eager to move to a utility where he could put down roots. He now lives close enough to his family that he can still help a little on the farm. “We’ll work night and day – it’s hard work but it’s rewarding,” he says.

Tyler and his wife Shelby are raising three girls: Blair, Louise, and Kennedy. They enjoy the outdoors including dirt bikes and spending lots of family time on the farm.